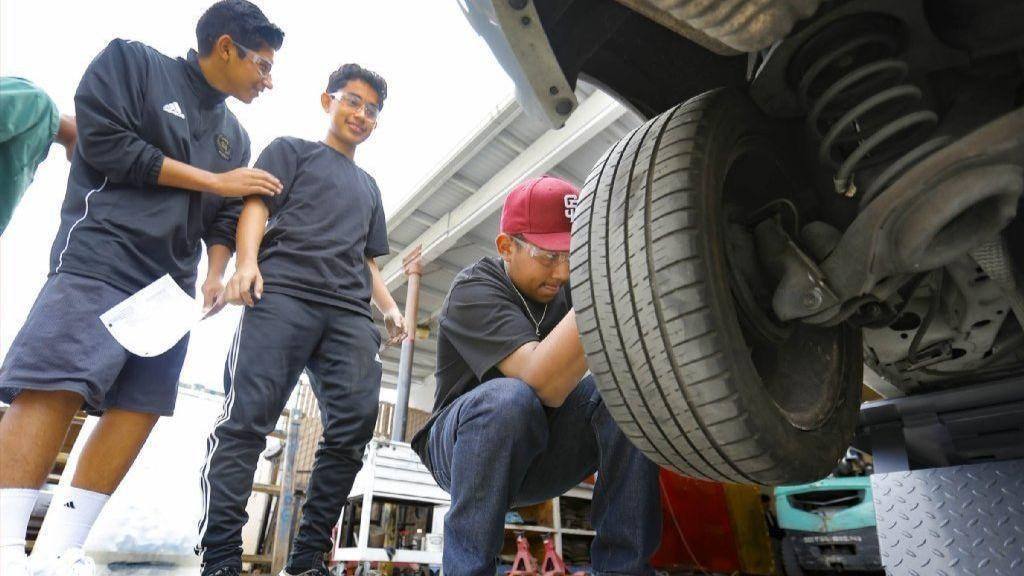 ​
Students find their callings through career technical ...
www.sandiegouniontribune.com
The events, scheduled during national Manufacturing Week, allowed local business leaders to learn about career technical education classes, which help students get a taste of the professional world.

SAN DIEGO (NEWS 8) - Escondido's Orange Glen High School's Culinary Arts students competed against each other to create a new cookie flavor for The Cravory.
Uber Eats made the competition possible and the all-new Razzle Dazzle is now on The Cravory menu; Orange Glen High School gets a portion of the proceeds for each cookie sold.
News 8's Ashley Jacobs talks with The Cravory, an Orange Glen teacher and one of the winning team's students to see how beneficial this competition was. She also finds out whether you can still order cookies in time for Mother's Day. 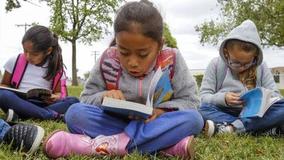 Conway Elementary School students Arlen Cortez, center, Abigail Espinoza, right, and Melanie Gonzalez, all first graders, start to read the books they just picked out of out of the new "Little Free Library" box, one of eighteen built by Escondido High school students. (Hayne Palmour IV)
On a drizzly afternoon Tuesday, first-graders from Conway Elementary School in Escondido waited to open a small cabinet, and enter the world of discovery.

The structure — a white box with hinged glass doors, mounted on a wheeled stand — was the school’s new “Little Free Library,” a neighborhood book exchange. It was one of 18 such cases built by woodworking students at Escondido High School for each of the community’s elementary campuses.

With two bookshelves stuffed full of volumes in English and Spanish, it allows students and their families to take books that appeal to them, and donate those they don’t need.
​
“Take a book, share one back,” librarian Tanya Turek told the crowd of mostly six- and seven-year-olds. “If you love it and want to sleep with it under your pillow, great! Or if you can, return it. Or give back an old book.”

Lilliana Rosales, 7, introduced the gift, addressing her classmates as “stewards of the library” and encouraged them to explore its offerings.

“It helps people to grow their minds with curiosity and inspiration, so maybe they can write a book one day,” Rosales said, explaining that she prefers books about the world’s mysteries, such as the lost city of Atlantis. “Books are a good place to start in your imagination.”

She’s already a regular at other Little Free Libraries, including one near Conway School, and helps her mother look out for new ones.

“If we’re driving and we see one, I’ll make a U-turn to go back and get a book,” said her mother, Venessa Rosales. “I keep books in my car to donate.”

Arlen Cortez Perez, 6, picked the book “Esperanza Rising” about a young Mexican immigrant girl working as a farm laborer, but didn’t think she’d want to return it. She had coveted the book since her sister read it, and was thrilled to have her own copy.

“I was thinking she doesn’t have to read it to me because I’ve got my own now,” Cortez Perez said. “I think I’m not going to bring this one back, but I might bring some from home. I love this book. It’s so cool. It has so many pages, so you can read some more.”
The book exchange had been a dream of Turek’s since she began working at the school five years ago. About 80 percent of students in the district come from socioeconomically disadvantaged homes, according to the California Department of Education’s school dashboard, and those families are less likely to have books in the home.

“The idea that people have access to books for free is really exciting to me,” Turek said.

She broached the idea with Escondido High School woodworking teacher Nathan Boelhauf. Coincidentally, Little Free Libraries had also been on his mind. For several years, he has enlisted students to build children’s furniture and bookshelves for needy families, so the book exchanges seemed a natural fit for his class. He proposed making 18 of them — one for each of Escondido’s elementary schools.

“This is something I’ve been wanting to do since I started” teaching at the high school, Boelhauf said. “I believe that (encouraging) literacy and reading is one of the most important things you can do.”

Turek received a grant from the Escondido Education Foundation to register the boxes and fit them with plaques designating them as Little Free Libraries. And she secured $4,500 from the Current Wisdom Foundation in San Marcos to purchase adult books in Spanish and English to share in the boxes.

Little Free Libraries started in Wisconsin in 2009, when a Wisconsin man built one to honor his late mother, according to the nonprofit organization by that name. It became an international movement, as bibliophiles around the globe began building and installing the boxes.

With more than 70,000 across 80 countries, the libraries have become a book-lover’s treasure hunt, an ice-breaker for neighbors and a chance for artistic expression. Many feature vivid colors and whimsical designs, including vintage schoolhouses, animals or Harry Potter novels.

Boelhauf’s approach, by contrast, was practical. His students were skeptical of the idea at first, and worried the boxes would be vandalized or stolen. So they constructed the doors out of shatter-resistant plexiglass instead of glass to keep the books secure. And they mounted the boxes on wheels so they could be rolled back into the school after hours and during the summer.

His class built the boxes through an assembly-line production system, with students splitting up tasks of cutting wood, assembling and finishing the structures. In the end, they gained experience with industrial carpentry, as well as a sense of community participation.

“It’s an exciting project for kids to undertake because they’re going back to the elementary schools that they went to,” Boelhauf said. “So there’s a personal connection for them.”

As a student picked a “Fancy Nancy” from the box, third-grader Donna Arias was reminded that she had something to give back, too.

“I have a glow-in-the-dark ‘Fancy Nancy’ book,” she told Turek. “I have a whole bunch of books, and I don’t need it anymore. I will bring it to you.”